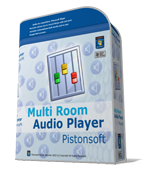 "MultiRoom Audio Player is an amazing piece of software plays an important role in the audio chores at our haunted house." Read More
Russ W. Moore

"Congratulation for your Product, It is exactly what I was looking for! I'm Product Manager at SOUND4, a French company specialized in Broadcast Sound Processing. We design Professional Products for Radio (FM, DAB, Webradio) and Studio (On Air Studio and Production Studios). We are looking for a multi-channel audio player to demonstrate our product, we have done some test, your Multi Room Sound System work perfectly on our cards."
Vincent Defretin, www.sound4.biz

"Thank you for your program! We used it to install an inexpensive multi-zone setup. Your solution is the cheapest compared to the expensive hardware complexes. Very conveniently manage all playlists from a single program. Thank you!"
Sergey